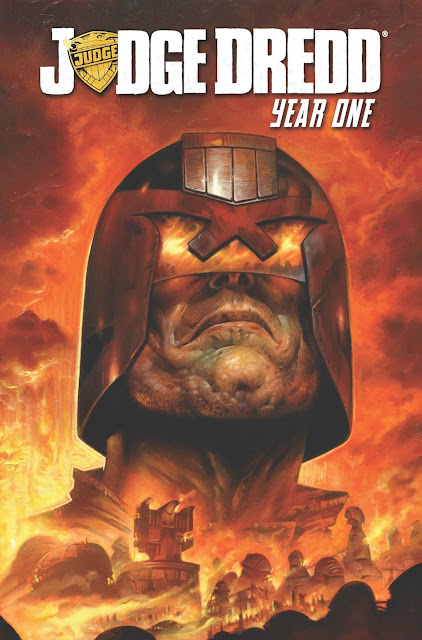 John here again with another comic review. This time it's part of IDW’s Judge Dredd series. For those unsure IDW is the American Comic company with rights to the Judge Dredd franchise, for the most part they republish older Dredd stories. They also deal with Dredd's early years and his time spent in Mega-City 2, though some of these stories are very hit and miss. This review we are going back to Dredd's early years. All the way back in fact to his first year as a full eagle Judge. So lets go!

Here is the graphic novel info

First up unlike a lot of Year One stories (Batman etc), this isn't set up as Dredd's first experience in law or arresting people. But is instead set during his first year as a full - eagle Judge; a term for freshly graduated Cadets. Now the nice twist to this type of series, is that the Dredd we see here is barely older than the Juves he's chasing. Dredd is in his late teenager years, possibly early twenties. So in a rare turn of events we have a rookie Dredd, fresh faced and wanting to make a difference. Due to this we see Dredd getting called Rookie a lot, which he hates (but I love). But with Dredd being Dredd, he behaves like a straight ass Judge who follows the rule of the law by the letter. Even as a rookie he has the balls to recite the law to more senior Judges. 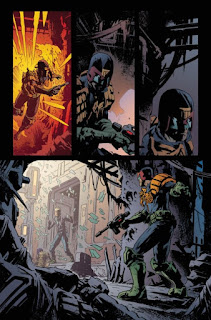 The story itself is rather interesting. All over MC-1 Juves ranging from the age of one to eighteen, are randomly developing very destructive psychic powers. With the newly developed and undermanned Psi-Division (so no Anderson yet), being stretched to the limits trying to locate and contain the source. They have no choice but to team up with the street judges. As becomes tradition, Dredd isn't so keen with the PSI department or the members of it's unusual division. But at the same time Dredd and the MC-1 judges are unprepared for this outbreak and must work together to solve the crisis.

Soon things are escalating way out of control and Dredd watches as an eight year old, tears apart a perp for threatening to shoot his dad! Using only his anger and the newly found psi abilities. Slowly Dredd comes to the realization he is going to need help from a more experienced Judge. From here on in the story takes a dark twist as Dredd has to face down the source of all these Psi issues. We also get to see a young Rico along side Dredd still as cadets.

This was a great read and well worth a purchase. The art by Simon Coleby is beautiful and this comic has initiated my interest in more of the IDW series (beyond the cheesy looking ones).

Easy comic to rate 4 Dredds out of 5.

Posted by Adventures with Peps at September 03, 2017