Hey fellow boozers it's the weekend so time for a beer! I'm going to continue my drinking adventures with another Rogue beer. This time though it's part of their Rogue Nation range. Sporting a very nice logo of a fist symbol, bringing forth images of revolution or anarchy. I enjoyed this beer at the cottage over summer so the photographs are on scene and woody. Can I go back there? 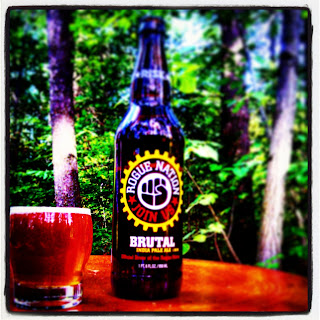 Commercial Fluff:
"Brutal combines Oregon hops with English Malts. The Oregon grown Crystal hop is a triploid variety developed from the German Hallertau aroma hop variety with contributions from Cascade, Brewers Gold, and Early Green. Crystal is the only hop used in brewing Brutal and it provides a massive amount of aroma without dry-hopping. The English malts used are floor malted Pipkin (a mellow cross of Maris Otter and Warboys, from an English company called Beeston), Cara Vienna and Cara Wheat." 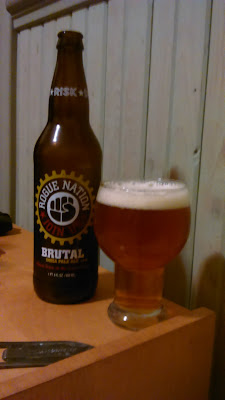 Sight: Hazy Orange-Amber beer, when pouring it developed a large off white head.
Aroma: Straight off you can tell it's a strong malty beer with hints of caramel. But this is backed up by an orange and I think grapefruit hoppy smell.
Taste: Sweet and almost sticky. The orange and grapefruit taste is there causing the beer to have a strong bitter after taste. What you might expect more from the skin of these fruits. Overall very drying and bitter.
Would I buy it again? Yes.

Now I have to say I enjoyed this beer no mistake. But it wasn't what I expected. When I think of the word Brutal it made me expect a hard hitting bitter hop forward beer. Instead we get a sweet bitter beer with hints of hops. It reminds me of high abv IPAs out of cask. Were it becomes almost syrupy in texture on the tongue and loses something special with the flavor. No mistake though this is a great beer!

Have you had it? What are your thoughts. Have you tried it? What do you think? Drop a comment below.
Posted by Adventures with Peps at September 17, 2017