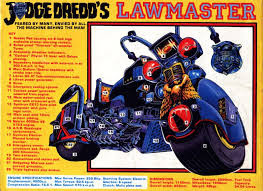 First up just want to say this was shamelessly taken from Mongoose Publishing and if they are unhappy please contact me and I will remove. I will be posting a few of their articles mainly to allow me quicker access to the info. They no longer hold the rights to these so I don't see the harm in using them.

Lawmaster MKIII
As much a signal of the Judges’ ultimate authority as their uniform or Lawgiver firearm, the MkIII Lawmaster bike is a high adaptable vehicle. Heavily armoured to endure a great deal of punishment, heavily armed to destroy almost any other vehicle on the street and yet still fast enough to pursue any perp, the Lawmaster is perhaps the ultimate crime-fighting tool after a Judge himself.

The Mk III Lawmaster bears a Cyclops Phylon TX Laser Cannon and twin bike cannon as standard armaments, together with a holster for an auxiliary scattergun. The on-board bike computer is a multi-functional device that allows a Judge to access any Justice Department resource quickly and easily, while also possessing the capability, through the use of gyroscopic stabilisation, to actually drive the bike without a Judge on board, and even fire its weapons! Even the patented Firerock tyres are a triumph of design, for they are able to maintain a strong grip at all speeds, in all conditions, and yet are completely bullet-proof. Two storage pods slung either side of the rear wheel permit a Judge to carry a great deal of equipment with him at all times, but the Notron 4000 cc V8 KT23 engine can propel this heavily laden machine to speeds well in excess of three hundred miles per hour.

The Lawmaster’s Notron 4000cc V8 engine with ASB quad carburettors is the power behind the Lawmaster and generates enough energy to run virtually all the bike’s functions. The powerplant runs on Justice Department, special formula, non-explosive, minimal emissions, synthidiesel and a Judge can gain an entire shift’s patrol from a single tank. The fuel tank and engine are both protected by 12mm plastisteel plate.

Based on the heavy duty street cannon of other Justice Department vehicles such as the Pat-Wagon, the Lawmaster’s bike cannon are lethal weapons, fully capable of bringing a stop to the largest vehicle with ease. The two cannon, mounted below the fairing of the Lawmaster, are twin-linked. Each bike cannon stores 30 rounds within its magazine.

Bike Cannon Flare Round
Fired from the Lawmaster’s bike cannon, the flare round is used primarily to launch visual distress calls, though it has the secondary benefit of instantly illuminating any darkened space. Each bike cannon stores a single flare round within its firing mechanism, which may be launched on manual or verbal command, though as the bike cannon are twin-linked, both flare rounds must be launched at the same time. Flares will illuminate a circular area of 30 metres and last for 1 minute. 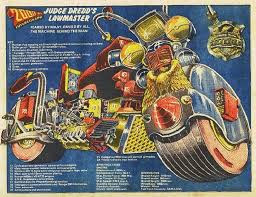 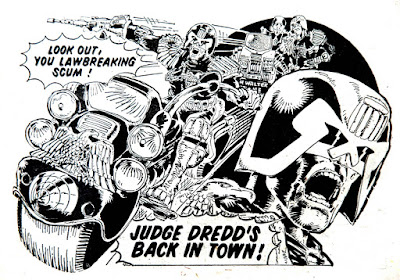 Bike Computer
The Synitron GK13 auto-pilot computer forms the heart of the Lawmaster, and is responsible for keeping a Judge on his bike and active, even in the most adverse of conditions. In order to achieve this, the bike computer’s gyro logic units make the entire vehicle both light to control and yet very stable as they constantly make corrections to the bike’s speed and position on the road. The bike computer is sophisticated enough to control the Lawmaster without a Judge’s input altogether. Linked into the Likron GS 4T telecommunications unit, the bike computer is also capable of connecting its Judge with virtually any resource of the Justice Department quickly and easily, with the minimum of interaction from the Judge himself. The Likron GS 4T has a maximum range of well over 160 miles. Just like the Lawgiver, the bike computer can accept verbal commands from its Judge, and relay information either verbally or on its high-resolution screen. The bike computer combines an automatic target acquisition system with fire control, allowing it to fire the Lawmaster’s weapons, also without intervention from the Judge.

Mounted under the rear fairing just behind the wheel, is a Tikkra TT cable winch with 20 yards of line. Fully motorised, the cable is stressed for weights of over one ton, though the Lawmaster can realistically pull only half of this before losing stability.

Generally considered to be the most powerful weapon, shot-for-shot, a Judge on the streets has at his disposal, the Cyclops laser cannon, centre-line mounted on the Lawmaster’s front fairing, is capable of punching through over a foot of armoured plastisteel plating. However, it draws an incredible amount of energy from the Lawmaster’s own power plant with each shot and takes a long time to recharge between each shot, making it a weapon to be used only in the most dire of circumstances. When used on a Lawmaster, a Cyclops laser will take a full minute to recharge its over-sized capacitors before being able to fire again.

The Lawmaster has a very distinctive front end, dominated by a large plastisteel eagle and its array of five headlamps. The main headlamp is perched between the handlebars and, at full power, is capable of illuminating targets over a mile away. The secondary headlamps are automatically switched on by the bike computer when travelling through smoke or fog, or when the Judge requires as much light as possible

Code 99 Red Emergency Call
Mounted behind the bike computer on every Lawmaster is a quick release emergency button. Upon activation, this will send out a Priority One (Code 99 Red) Judge in Distress call to every Justice Department unit within 5 miles.

Siren
All Lawmasters carry a high-powered siren to alert citizens of a Judge in hot pursuit of a perp. The maximum power setting of a Lawmaster’s siren is deafening, having a clear range of about a mile, though this is of little discomfort to a Judge wearing his helmet. Senior Judges are sometimes permitted to alter the tone and frequency of their sirens so as to create a distinctive sound, allowing perps to know just who is tracking them down.

Armoured Saddle
The saddle is fitted with 12mm plastisteel armour, and made from memory foam, which contours to the Judge’s frame and offers maximum comfort for the long hours spent on patrol.

Scattergun
Holstered on the side of the fuel tank, this shotgun-like back-up weapon is pump-action and fires either standard 12-gauge plastisteel shot, plasteen baton rounds or stumm gas rounds. The Scattergun can hold up to 12 rounds in its magazine and different rounds can be mixed in the same magazine or individually loaded into the breech.

Miniature Mondays - The times and the photos are a changing.