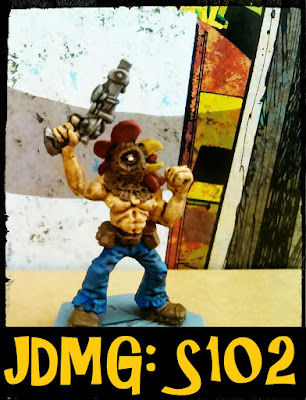 Welcome to my first own Sector 102 Character Fact File. Before I get into my lore about the character I wanted to talk about the model. It was produced in 1985 by Games Workshop to go ago side their Judge Dredd Role Playing game. Apart from being given the name "Chapman Pincher", I struggled to find any other links to a 2000 AD story line. So who is this Chapman Pincher and where did he come from? If you have more info on this character please share with me by dropping a comment below. The only link I could find to him was the Chapman Pincher Block that appears in the block wars story arc so I believe this model is meant to represent one of the block's residents?

So I'm making up my own fluff for the model so here goes.


++ Attention all Judges ++
++ Chapman Pincher the Ghoul seen near waterfront of Sector 102. Approach with caution, wanted in the connection with a brutal murders and links to cannibalism ++

Not much is known about Chapman Pincher or his past. This could be down to two reasons.


Where ever he is from Chapman is trouble. First spotted by spy cameras, looting victims bodies following the last Water Rats gang fight. It is possible Chapman was just taking the opportunity of the violence or maybe he's a perp for hire. Either way Chapman has since gone on to murder and rob five more perps and citizens. Worst yet he seems to be eating the ears of victims. Extremely dangerous and unhinged Chapman is to be approached with extreme caution. 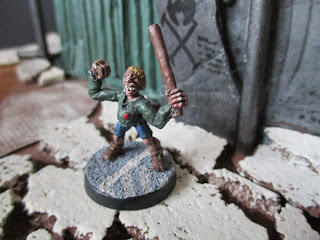 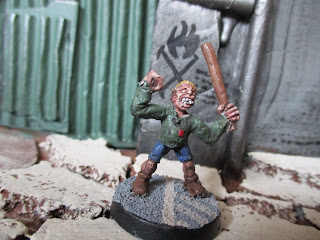 Ultimately a weak character, Chapman is good for just filling out on some extra bodies. Use him to support you guys as shield and add weight of numbers if you can get him into combat. Chapman has had a sad life that can only end quickly now that he is on the Streets of MC-1.

As always drop me a comment below and let me if you it or not and if you find out anymore info on him let me know.
Posted by Adventures with Peps at August 13, 2017