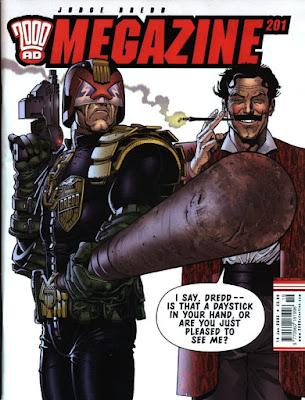 Welcome friends to the first Megazine review. This section of the blog will just be looking into the monthly magazines. As my regular readers must know by now, I am a big Dredd fan. I enjoy all things Dredd related, so it was truly only a matter of time before I start back up with the Megazines. Why 201? It's the earliest one I can get on the 2000 AD app, originally published in January 2003, so let us go back 13 years and relive some great tales:

The cover for 201 is drawn by the talented Chris Bylthe and shows Judge Dredd in his usual stern pose, whilst in the background we have Devlin Waugh the cheeky, lovable fan favourite rogue. When I first saw this imagine, I assumed we are getting a Devlin/Dredd crossover. Sadly I was wrongly mistaken. What we do get is a Devlin heavy meg, involving a new Devlin short story, comic and an article.

So for those new to the Judge Dredd Meg here is a quick lowdown. It's a spin off from 2000AD and the idea behind the original meg was to allow for more exploration of the Dredd universe. So most if not all stories hail from that theme. You normally get two Dredd tales at least and then the rest can be from anywhere. In Meg 201 for example we get two Dredd comic strips 'Phartz!' and 'War Crimes', along with a written tale called 'A Nativity Tale'. We a get a single strip about Kleggs (an alien merc race from Dredd), a comic and story involving Devlin Waugh (hailing from futuristic Vatican City) and also a comic set in the near future city of Odysseus (not sure if it will link into Dreddverse or not let). 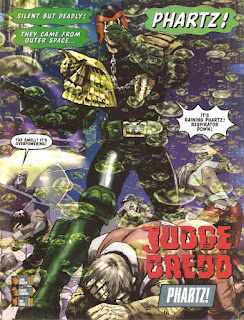 This is a comical tale produced by the original creators. The story follows a bunch of gas based aliens, who have took control of the MC-1 Aeroball squad. Their mission is to use the hosts as a means to smuggle themselves into Mega City One, in search of their missing queen. There is a side effect of the process though and that is a sulfurous fart smell.

Overall a very light hearted tale, showing off the more comical side of life in the Big Meg.


Last seen during the 'Day the Law Died' saga. Kleggs are a mercenary humanoid crocodile race (yep you read correctly). Who work for meat and the enjoyment of the fight. This tale opens up on a Klegg Warfleet attacking an alien library in the Byblios system. Their mission is to find out the location of a planet destroying weapon. During this one off tale, we get introduced to the internal power struggle of Klegg families and just how silly and clumsy kleggs really are.

Tho it is another comical tale, I really liked reading about the Kleggs again and I hope the characters introduced in this tale come back again.


A Christmas Tale of hope and joy starring Dredd (strange sentence to write). With most of the meg settling down for Christmas day, we join a young pregnant couple as they attempt to leave Sector 502 for good. Only problem is Sector 502 is separated from the main city and so they have to travel across 'The Link' (think crazy big multi lane highway). This is when things take a turn for the worst as their car breaks down midway. Add to this a jailbreak, a punishing radstorm and the onset of birth and this poor couple are in real trouble. Lucky for them Dredd arrives on scene.

A really nicely tale, with a good tempo and a light hearted ending. Nice to see Dredd in a softer light having to rely on others to bring a newborn into the world. 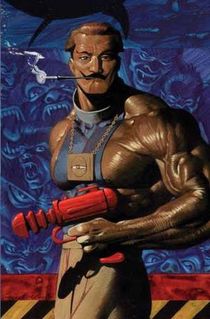 Set shortly after the Aquatraz escape. The Bahamas has set a business revolving around the hunting of the escaped Vampires. Attracting tourists from across the world to Fangland! A vampire safari resort. The tale opens with a family from Texas City wanting to bag their very own Vamp. As they board a glass bottomed boat and set sail for adventure, something stirs beneath the waves, so what could possible go wrong?

A great intro piece for the upcoming Devlin tale. The artwork was stunning to all it lacked was Devlin himself, but I'm sure he will arrive soon.


This tale is seeming also set after Aquatraz, possibly at the same time as the above tale. The story sets us up in Cote d'Azur with a team of Undercover Brit-Cit Judges. Their objective to protect an aging film star from a crazy stalker. Only problem is this Stalker knows how to raise demons to his aid! Lucky for the star Devlin Waugh Occult specialist, is enjoying a snack at the local casino.

Good amount of action and some humorous parts, would like to see more Devlin action this way.


This tale I'm not sure if it's part of the Dreddverse or not. It is definitely set in the future in a City called Odysseus (not heard mentioned before in Dredd). But there is no Judges which makes me believe it's not a part of that world. The story opens on two cops as they attempt to arrest a 'Family' member. The Family seem to be this city's version of the mob. Just as the sting is about to go down, a long thought deceased member of the family appears and blows up the warehouse!
Later that same day we visit one of the police again, as he drinks alone at the bar. Unbeknownst to him, that he would soon end up in the arms of the daughter of Family leader.

I like it, it seems like it might be a supernatural tale of some sort and I look forward to reading more and seeing where it goes.

After getting herself arrested for illegal literature, Dredd hears the woes of a terminally ill old lady. She believes her son was wrongly accused of being a traitor during the Sov War. Now I'm sure if Dredd feels guilt for these acts of brutality (having dealt with traitors himself) or if he can just sense that the lady is telling the truth. Either way he decides to investigate.

Overall a heart warming tale, were Dredd attempts to right a wrong before it's too late.

A great read, no heavy hitting story arcs in this one. But a solid start to the new year of 2003 with most stories being light hearted or heart warming. Highlights of this comic for me have to be Phartz! and the Kleggs. Their tales had me giggling and set me up to enjoy the rest of the meg. As this is my first meg review I will try to restrain my score as I know the tales will get epic at some point, so I will give this a solid 3 out of 5.
Posted by Adventures with Peps at August 13, 2017