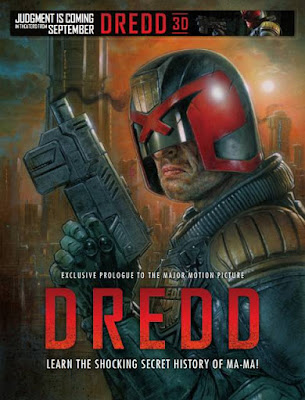 I'm back and so are the damn comics! The theme for the reading is good old Dredd, but not in his classic form. For today we are reviewing the movie comic spin-offs. Titled Ma-Ma and Underbelly.

Why two? Well the main reason is they are quite short tales, one being only 12 pages long and it seems wasteful to not put them together.

So let us get started.

First up is Dredd: Ma-Ma
​​
This comic is an exclusive prologue to the major motion picture. Now lucky for us readers both comics are now free to download over on the 2000 AD Website, so go treat yourself to them. 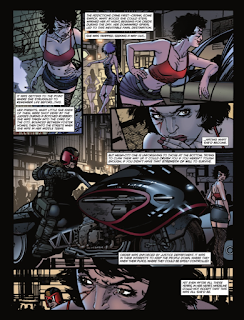 This comic as already mentioned is the prologue to the movie. It gives us a fuller background on the main villain of the Film Ma-Ma. For those who haven't seen the movie I highly recommend watching it (there will be a future review). Basically Ma-Ma controls the MA-MA Clan and is running a huge drug ring from their Block called Peach Tree in Sector 13.
As the comic begins we get introduced to Madeline, a drug abusing, alcoholic, working girl from the pleasure districts. For her life seems to pass by in painfully slow motion, living in a run down slum house, working for an abusive pimp, she sees no escape.
Madeline had no hope left as life crushed down on her, but that seemed to be changing, ever since she'd met Eric. Eric a drug technician, had just created a new form of Narcotics called- Slow-mo. Cheap to produce and highly addictive, this drug was to be their ticket out and the start of a new life for them both. Unfortunately for the pair Madeline's pimp Lester found out about them and paid Eric an unhealthy visit.
Walking in on Lester killing her love Eric, Madeline's resolve finally broke. The city her finally pushed her too far and all she could do was start fighting back. After giving Lester a dose of Eric's slow-mo, Madeline asks him to call her Ma-Ma, before castrating him with her teeth and publicly dumping his body in the pleasure district.
Here's where the story ends. I could really have done with another twenty plus pages of stories. I would've loved to have seen how she rose to power and took down the rival gangs. Or met her loyal lieutenant, but I guess that will be left to our imaginations. The story was quick and easy to read and had a great pace, without feeling to rushed. The artwork was fitting, gritty and matched the feel of the movie. So overall a great quick 5 minute read. 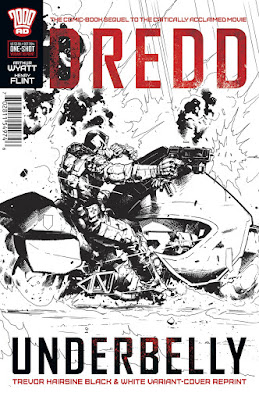 Set soon after the film. The story opens on the Cursed Earth. We watch as a group of muties get smuggled into the city, inside a false bottomed truck.
As they finally arrive at their destination, all their hopes and dreams are dashed; as they are soon informed the smugglers rates have risen and gained interest! The only way to now pay it off is to become apart of a slave workforce. We soon fine out the smugglers are producing a new kind of drug to replace the void left by Slo-Mo. As the realization of their position sinks in and as fear creeps over the group, the warehouse is raided by the Justice Department. A score of perps and muties are killed in the exchanging gunfire, with the survivors being processed and lead away. At this point we see how poorly treated the muties are, as a lot of the Judges simply don't care about them or believe them to be worth their time. One mutie pleads to a disinterested Judge for help finding her son, but only receives the cold shoulder. It's at this point that Judge Anderson appears and questions the mutie about their missing child.
The tale rapidly progresses along with Dredd's arrival and he agrees to aid Anderson in her quest to find the child and shut down this mutant trafficking ring.
The story ends as most do in the Dreddverse, with a big gun battle and a happy ever after finish.
Artwork was great as you would expect from Flint. The story had good pacing, but lacked on the background. I felt the villains lacked depth and focus, whilst another drugs related story seemed a bit of a cop out. I would of maybe preferred some sort of other theme for the trafficking victims, maybe household slaves or illegal fight pits. But it was nice to see the city and it's outskirts broaden. I feel this is the last of these stories in this alternate MC-1, which is a shame as I would really like to see a progression.

3.5 out of 5
​​
Well thank you for sticking with me for another review. I promise some miniatures will be appearing soon. I might even attempt a Ma-Ma gang in the near future. As always drop me a comment below to say hi. And let me know if you've read these comics yet.
Posted by Adventures with Peps at August 06, 2017