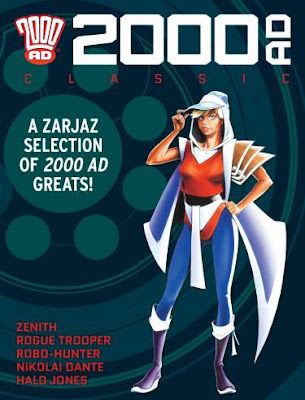 Day off work so can only mean one thing.....Time to read another comic! This time it's the turn of 2000 AD Classic, a comic that is free to download from 2000 AD online. Described by the team:

I'm serious hoping it's better than 2000 AD Modern, which left me slightly disappointed with it's lack of complete stories and a poor showing of some of the stories".

Cover is pretty standard and similar to the Modern issue. Showing Tharg's head piece in the background, whilst the foreground is a poorly cropped picture of Halo Jones. Seriously the design team need to try a bit harder with these. They managed to crop out a large part of Halo's coat under her left arm! The first few pages are adverts for 2000 AD and their apps so I won't bore you with them and will just move onto the first tale.

Great opening story for this issue. After Dredd, Rogue Trooper is my second favourite strip to have been produced by 2000 AD. And this is what I want to see from these comics. A real introduction to a character and story line. On the first page we epic opening showing and explaining the planet and the war that is waging onto it. Whilst we watch a battle unfolding we get introduced to Rogue and even get to hear some back story. Great start to the issue. 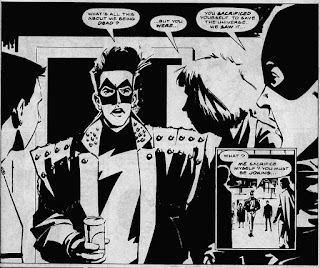 I'm completely new to Zenith, having missed it the first time around. So I was excited to finally be able to experience it from the start. It didn't disappoint. We are introduced to an alternative timeline of super heroes leading up to the 90's and the hero Zenith, who seems to be the only remaining super hero on the planet. At the age of 19 he seems to have a superior complex, that I can only imagine will come and bite him in the arse. I'm intrigued to read more and I'm glad there are now collectors editions out. 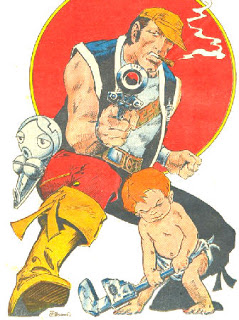 I have happy memories of Sam Slade in 2000 AD in the 90's. The scripts were colourful and funny, so lets see how it all began. Interesting start to this series. Sam Slade seems like a futuristic version of a pulp detective. But instead of taking on the mob, he is chasing robots. Slade has his trademark wit and is cool to see finally how he became young. Like Zenith, Robo-Hunter has just had a collected edition released, which will end up on my to buy list. So far we have three out of three.

A familiar story and hard to imagine it being described as a classic! I remember reading this when it first arrived, which shockingly must have been late 90's/early 00's. Nikolai Dante is a futuristic version of Errol Flynn. Swashbuckling his through adventures and women's bed. The whole story arcs where quite exciting and epic. I would highly recommend people to seek out these comics. 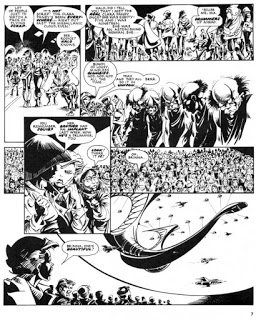 Now this is a tale I have heard lots about from the veteran readers, but until now have never read myself. Seems to read like a coming of age tale, which is cool. Halo Jones is a teenager on the verge of deciding what to do with her life and how her family will be a part of it. The two parts we get in this meg, show us around her environment and introduces characters which I assume will play a role in her tale. The story seems to have a lot to offer and I look forward to reading more.

This is exactly how the Modern one should have been done. Each story was cleanly written and introduced us to the characters and their surroundings perfectly. Have read this I have now added all these tales to my reading list, which is a positive sign. Well worth reading.