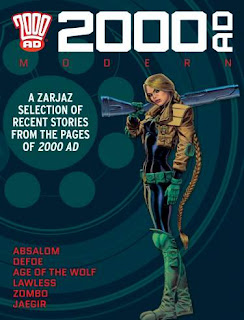 Welcome to another comic review. As mentioned before, I am a big fan of the company 2000 AD: a British based Sci-fi/Fantasy Comic and I have been immersed in their stories and artwork since I was thirteen. Every Friday was a day of excitement going to the local newsagents and buying the comic. Move on twenty years and a lot has changed. I still love reading 2000ad but now they have gone full digital.

A positive aspect of digital is now I can get the comic I love wherever I am. Especially as I now live in Canada (Sorry IDW your Dredd isn't my Dredd). Better let they now also do free content! So go check out the site and download some.

For this comic review I will be doing the free Download 2000 AD Modern.​​

This is an introduction to a lot of the newer stories being introduced by 2000 AD and contains five opening tales as a kind of gateway drug to get you hooked. I dare you to read it and not want to read more!
​​ 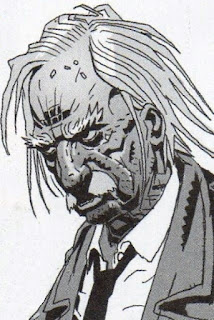 The story being only the first two parts, introduces us to Inspector Harry Absalom. A grizzled old policemen, suffering from cancer and living in futuristic London. The story seems to involve vampires and a family who seem to have a past with Absalom, but that is all you get to find out. The artwork is great in grey scale and the characters seem interesting, but sadly the tale finishes too early and I'm left wanting more.....a recurring theme with this magazine.

Full disclosure I struggle with Defoe, so I am bias when reviewing this piece and for that I am sorry. Titus Crow is a 'living dead hunter', from the Church of England. He is an angry, aggressive man and this story is set in Whitechapel London (an area I once called home). That is all I want to write, to be honest. I just don't like this character, he seems very one dimensional and the whole zombie arc is dull and boring to me. Highlights would be the artwork, as it portrays the Gothic era perfectly, just a shame it went with zombies and not some other theme.
​​ 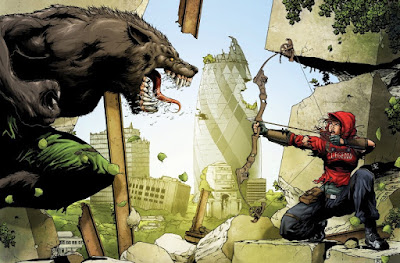 These tales all seem to have a theme so far; London and Supernatural. The tale begins in a museum, with a tape player revealing the backstory leading up to this point.
It would seem that London is under the effects of a Full Moon. But what makes this full moon different is the fact that it has lasted for the last few days. This has lead to a rise in religious cults and mass suicides. If that wasn't enough, there seems to be werewolves killing people in the streets and in the tube stations! The story's main character seems to a woman called Rowan and her attempts to escape London.
This story has me intrigued to find out more about it. The artwork is great and I do love seeing modern day iconic London locations, with Werewolves running around them. Only downside for me was that I was left wanting more. Great recovery after Defoe. 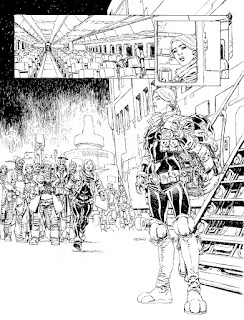 We move away from London (finally) and into the time stream of the Dreddverse (Yay!). The script is written by one of my favourite authors at the moment Dan Abnett. I'm a big fan of his Warhammer 40k Gaunt's Ghosts series and Sinister Dexter which he also writes for 2000 AD. So straight away I had high expectations. The artwork is classic black and white line drawings of which I am a fan. The story is set on 43 Rega a Mega City colony out on the outer rim. Think sci-fi western and you are not far off. The only law out here is brought by the Colonial Marshals, a pretty lonely and thankless task. The tale begins with the eager town folk awaiting on a shuttle carrying their new Marshal to enter town. As she steps off the shuttle you can tell instantly that she isn't a people person, which leads to funny and awkward moments. The story then follows her, as she makes her first impressions on the new township. I really enjoyed this tale, mainly because it was a self contained story and left no questions at the end. It has also made me want to read more of this, which I believe is set just after Insurrection, another great tale by Dan Abnett and I'm interested to see if the two will cross path in the future.

First up it's a Zombie story (yawn) and if you've actually read above, you know I have a dislike for Zombies. Plus side the art is by Henry Flint so I have some hope for this story. Artwork was definitely a plus point, the story itself reads like a cheesy B-Movie which is the point (or I hope was the point?). We get to meet a rag tag group of humans, travelling on the same space flight as two government officials with a mysterious coffin shaped boxed. During the routine flight the ship is hit by asteroids and forced to crash on a Death World. We then get to watch the survivors get killed off by the planet, whilst the coffin/box slowly opens. The story ends with the main character Zombo, leaning out of the box asking "Can I eat you?". This isn't a story I need to come back too. Looks fun for a quick read, but just doesn't appeal to me. Especially as the main character doesn't appear till the final panel.
​​ 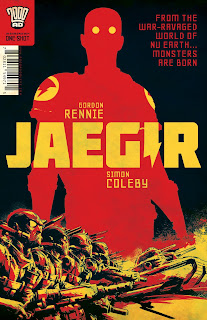 I'm not going to talk about this one as I have already done a full post on this story. So if you are interested then follow this link.

So with Jaegir we've reached the end of this free comic. Overall I'm glad it is a free comic, as most of the stories were incomplete and didn't really showcase the tales to their full potential. I would have preferred to have seen full single shot episodes instead.They are however a great showcase of the artwork and has made me want to find out more about Lawless, Absalom and Age of the Wolf, which is the whole point of this freebie. Looks like maybe it's time to catch up with the Judge Dredd Megazine.

As always thanks for reading
Posted by Adventures with Peps at August 03, 2017