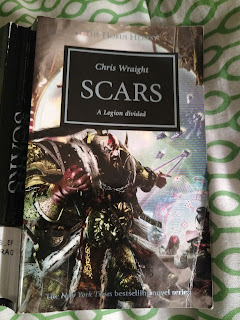 Welcome to my books of 2017 series. The idea was to read a book a month, which I succeeded in doing during January, February and March, so here comes April! I've just completed the novel Scars by Chris Wraight.
​​
Quick basic background for the book: 'Scars' is part of a larger series of books called the 'Horus Heresy' produced by the publisher group Black Library. It is set within a timeline of Games Workshop's popular Sci-fi game system Warhammer 40k (but set 10k years before that game). Basically the galaxy is being torn apart by civil war and brother fights brother for control of the stars. These ''brothers'' are the Primarchs genetically designed to conquer the stars for an uncaring father. Leading armies of Space Marines built from their own genetic make up. But now half of the brothers have fallen to Chaos worshiping and have betrayed their own kin. The series is truly massive currently with about 50 titles on offer at the moment. Scars is number 28 in the series and the civil war is in full swing for most of the parties involved. So let's get into the review.

The book begins by following two inductees who would ultimately join the White Scars Legion (the main focus of the book). One is Chorgorian (from the homeworld of the White Scars), whilst the other was Terran born. Throughout the book we are treated to each of their viewpoints. This way of storytelling helps to showcase the divide within the legion- those born from the homeworld progress quicker and gain higher ranks, compared to off worlders (makes me think All are equal but some are more equal than others). In these first few chapters we get introduced to some lore and general fluff for the White Scars and find out why they haven't played a role in the Heresy so far. The main reason seems to be they suffer from an strong independent streak and prefer to work alone. Due to this streak they were able to be manipulated by Horus and isolated from the greater galaxy and started the book completely unaware that civil war had even broke out! 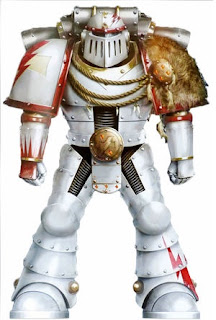 We then randomly take a break from the White Scars to be reintroduced to Leman Russ and his Space Wolves and find out what they have been up to since the book 'Prospero Burns' and how they feel about the whole manipulation of Horus (the main brother to fall to Chaos) tricking them into killing a brothers Legion. Licking their wounds after that conflict, they don’t have much time to brood as the Alpha Legion (another brothers legion possibly fallen to chaos) hunts them down, in an attempt to stop Russ and the Space Wolves from reaching Terra. It was fun to revisit characters like Russ and Bjorn again and if anything their appearance seemed way too brief; though especially brutal with ship boarding actions, their part of the tale ends very suddenly being more of a cameo even though they take up a good few chapters. This was maybe the biggest let down of the book for me, it seemed forced in and wasn't really needed in my opinion.
​​
Getting back on track and ignoring this part of the book, we follow the confusion that the Scars suffer, upon hearing the news of the Civil War. Part of the Scar's force can't believe Horus would rebel and believe the other brothers must be the traitors, whilst some choose to wait for the Khan to make a choice for them all. This leads to the Khan questioning who he should ally with, Horus: friend, brother, Warmaster, or his Father: Emperor, Tyrant, aloof, manipulator. This sets in motion a great rest of the book as the Khan and his forces must try to work out who to trust and which liars to follow. Ultimately this was the best type of intrigue. Having missed the start of the war and receiving broken communication what would you do, who would you trust? This is when the two troopers at the beginning of the tale comes back into play, as they each pick a different side and now have to deal with the consequences of their actions. I really loved this style of storytelling as you can't help but feel for the troopers that picked the wrong side, rushing to the wrong choices due to the lack of information and relying on gut feelings. 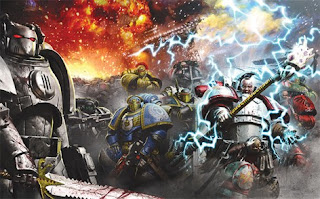 At this point I am going to stop writing before I ruin the plot too much. But expect Thousand Sons, Death Guard, Salamanders and Iron Hands all appearing, along with two more unmentioned Primarchs. This book was an enjoyable read and this was properly the fastest book I've read in the series. It was quick paced and each chapter read like a weekly short tale which was nice. It was also kind of nice to go back to the start and rediscover the reasoning behind the Heresy and how the perfect sons weren't so perfect after all and how the Emperor is a bit of a dick!

Thanks for reading this review and as always drop me a comment on here or on Facebook at @BeerswithPeps. I hope to move on to a couple of the series books that I missed (I think I jumped by two or three books whoops), so expect to see more from this series popping up on the feed. Also in other news Warhammer 40,000 8th edition drops next week so expect some follow up on that as well (written a while back). Exciting times indeed. 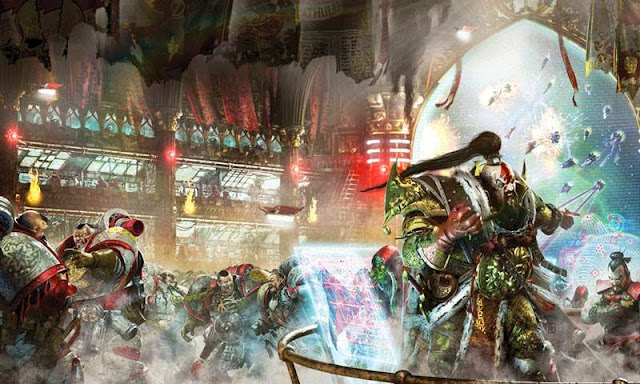