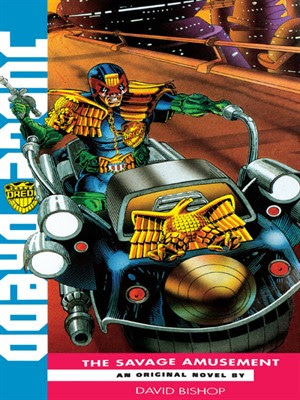 Hey Dredd heads time for a book review. If this is your first time here than here is a quick catch up. At the start of 2017 I wanted to set myself a task of reading more, with this in mind I am reading one book a month. Upon completion of a book I am rewarding myself, be it a game, a miniature or a special beer. Then if I like the book I keep it, otherwise it heads off to the local thrift store. Here are some links to the other completed books- LINK.

This book was for the month of March. I stayed with sci-fi but instead of the grim dark future 40k, I moved to the grim, oppressive world of Judge Dredd. Published by Virgin books way back in the 1990's (wow seems so long ago), I have managed to horde a few of these into my collection and I'm looking forward to reading them all. If you have no idea about Dredd (for shame) I recommend reading some of the other posts to get an idea.

"It's election day in Mega-City One, Judge Death is leading the polls. He's running for mayor on the 'All Life is a Crime' ticket. But if the Psi-Judges predictions are right, the Big Meg may soon be a crime free zone.
Out on the streets, the city's top lawman is doing his job. A robot-torturing maniac has taken over Weather Control - but Judge Dredd can handle it. Then he finds out that a satellite housing development is heading straight for the ground, and someone has let the super villains out of Iso-block 666. Mean while, a clone killing virus is spreading through the ranks of the judges...
Even for Mega-City One, it's shaping up to be a bad day."

First of wow, that's a huge amount of details and action going on in just one storyline. As I started to read the book, we get introduced to a mind numbing amount of characters and a huge selection of locations. Each with a critical part to play in the main story. This had two effects on me as the reader:
It left me a little overwhelmed, as you have to absorb a lot of info quickly to keep up with the story.
Provided real background into how chaotic and populous the Mega-City of the future is and I loved that part of it. 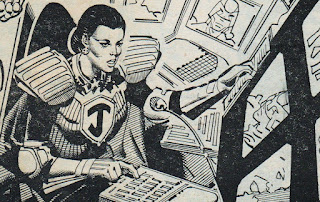 The story itself is set during the reign of Chief Judge McGruder (the era I first started reading 2000 AD). It follows on from the fall out of the Apocalypse War, Necropolis and the Zombie War. A lot of the city is in ruins, huge amounts of the populous are dead and the Judges Department is stretched to breaking point. This helps to set up just how much on a knife edge MC-1 truly is, with just one more major disaster the cities infra structure could collapse in on itself. And the rule of Law would be over.
​​
The book itself reads like a comic, if that makes sense? Which I have to say is a positive as it's quickly paced  and held my attention which is quite the feat. Author David Bishop, has done a great job of capturing the weird and wacky world of Mega-City One and it's varied citizens. This book has sparked my imagination and I'm looking forward to coming up ideas or scenarios to use in my games.

My only negative point was the fact that maybe too many characters were used in this story. And too many of the main characters from the comic was used, it's nice to have them there, but aren't there any other Judges? It's was just something that felt more like filler than plot driven writing which is a shame. 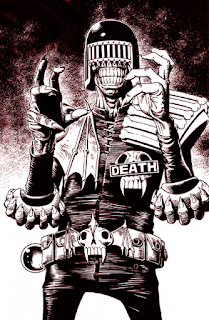 Highlights of the book for me include the Quote headers at the start of every chapter, which I will be posting later. I also enjoyed the whole mayoral election, with characters ranging from Tony Tubbs, to Country and Western singers and even a goat! I highly recommend this book, if you can find it on ebay.  Be careful if you are new to the Dredd-verse, I recommend hanging off reading this until you are more accustomed to the comics. Otherwise you may become lost in the wastelands.

Check back for April's book.
Posted by Adventures with Peps at August 06, 2017