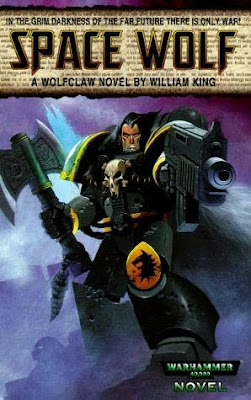 Commercial Fluff:
''Every hero starts somewhere, and this is the origin story of Ragnar Blackmane. He's the youngest warrior ever to become a Wolf Lord, but how did he come to join the Space Wolves in the first place? Find out here.''

Welcome back for another book review. This time I'm sticking with Sci-fi and the Warhammer 40,000 Universe. I found this novel for two Canadian dollars, in a local thrift store so you really can't go wrong. The last time I read anything Space Wolf related was way back when I was nine or ten and had the Second Edition game. So it will be cool to read some background fluff about them again.

Here is a quick overview of what a 'Space Wolf' is: firstly they are an original founding legion of the Space Marines (Games Workshop's most popular miniature line). They have freaky super human strength and reflexes granted to them by a gene-seed and have strong links to Vikings fluff wise: coming from a snow covered Death World, made up of rival tribes fighting over the small islands dotted on the world. Life is short as a human on Fenris and 35 is considered old. From these warring tribes, the Space Wolves select promising aspirants and train them to become Space Marines.

So in Space Wolf  we get introduced to Ragner Blackmane the hero of the tale and one of GW's most popular characters. We find out he is the son of a tribal chief who call themselves the Thunderfists. He comes across very arrogant and self sure himself. Until he actually meets a real Space Wolf. During this time he views everything the Space Wolf does as sorcery, as he has no understanding of technology and this is a fun chapter to read.

Time then moves forward a bit and Ragner is viewed as an adult now and looking for a wife (age wise I believe he is 14/15). This is when shit gets real! A rival clan raid his homestead and ultimately kill everyone! Ragner is only saved because he fought so well that he impressed a Space Wolf, becoming a potential recruit for the Sixth Space Marine Legion. What makes the story even more tragic, is that the enemy who beat Ragnar is recruited at the same time. Soon the two of them are teamed up together and forced to cooperate if they ever wish to become Space Wolves.

From this point onwards the book follows Ragner as he faces the trials of becoming a Space Wolf and having to face his inner demons. It introduces him to a wider world of warfare and technology and humbles him into realising how petty his early life had been.
This book ends with Ragner as a Blood Claw (lowest rank in the Chapter) on a search mission and I believe it sets us up with an introduction to the main villain of future books too.

Overall I found the book easy to read and more importantly enjoyable. It felt more like an introduction to Ragner, dealing with primary building a character. I look forward to starting the next book and seeing where King takes us. I want more open warfare and I definitely want to see the return of the Villain. This is a book series I can't wait to progress with. So with that in mind I headed out and snapped up the omnibus of the first three books. So expect more on these soon.

I'm also attempting to read more this year. The plan being at least one book a month, for a minimum of twelve books for 2017 (I'm not counting comics), so with this in mind this was January's entry and has given me an early start on February.

As always thanks for the continued support.
Posted by Adventures with Peps at August 05, 2017