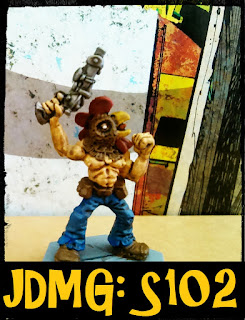 Following on from the Introduction of Sector 102 and the Judge Dredd Miniature Game; I thought it best to start with a character segment. The idea behind these segments is to highlight either a Hero or a Villain of Mega City One (so many villains!). The way I will go about this is by using lore and artwork from the comics and also a showcasing a painted Mini from the game. Sometimes they will be official characters created by 2000AD and sometimes they be home brewed characters. Either way I hope you will enjoy!

So with whom do you start with? Well of course you pick Aaron A. Aardvark! (sorry bit of a 2000ad joke, you'll get use to them). There seriously is only one choice on were to start and that is with.... 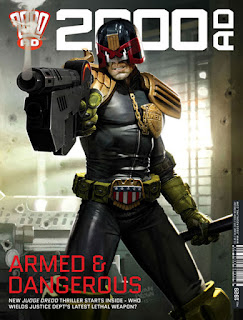 Mega-City One in the 22nd century, a vast urban nightmare situated along the east coast of post-apocalyptic North America. The irradiated wasteland known as The Cursed Earth to the west covering most of America, and the polluted Black Atlantic to the east. Home to 400 million citizens, crammed into gigantic city-blocks, overcrowding is rife, unemployment endemic and boredom universal. Tensions run a constant knife-edge, and crime is rampant. Only the Judges can prevent total anarchy. Empowered to dispense instant justice, these lawmen are judge, jury and executioner. The toughest of them all is Judge Joseph Dredd and he is the Law!

Judge Dredd, one of a number of clones of Chief Judge Fargo, is the most famous of the elite corps of Judges that run Mega-City One with the power not only to enforce the law, but also to instantly sentence offenders - to death if necessary. Dredd and his twin brother Rico emerged from the cloning facility as five year old in 2066, which took only a matter of months. At this young age they are enrolled into the Academy of Law, and graduate 13 years later in 2079. While these details are featured throughout the years of comics, recently the Judge Dredd Origins story arc delves into the atomic wars and Dredd's time as a cadet. If the timeline is correct Dredd is now currently over seventy years old. During his years of service he has received numerous injuries, many serious and his body is a mess of scars. During the Proteus mission (in which he and Judge Anderson were sent forward in time to 2120) his eyes were gouged out by a demon and were replaced with bionic ones. Most recently he was diagnosed with a malign growth on his duodenum, although this was caught in time to be treated. 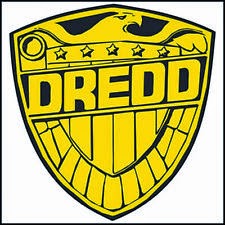 Judge Dredd has a large Lawmaster motorbike, which has powerful side-mounted cannons and a centrally-mounted laser (the 'Cyclops' laser), and has full Artificial Intelligence. It is also capable of responding to orders from the Judge, such as driving itself. It is connected to the Justice Department who can receive and transmit information from and to the bike and is equipped with a video communication system. Dredd also has a handgun which is known as a Lawgiver. It is DNA-coded so that no one else may use the weapon - it will explode if it reads an incorrect palm-print. These are standard issue for Judges, firing six types of ammo such as Standard bullets, Rubber Ricochet, Armour Piercing, Heat-Seeking, Incendiary and Hi-Ex. It can also fire tracking bullets, stun shots, and more, although it requires loading to do so. Other weapons Dredd carries as standard, include a Scattergun (pump-action shotgun), a "Daystick" (long two-handed cudgel), and a Boot Knife. His uniform consists of a blue/black bodysuit (depending on artist); green padded boots, knee pads, elbow pads and gloves; golden alloy shoulder pads (the right in the shape of an eagle - the symbol of the Justice Department), and a blue/black (depending on artist) helmet with a red side trim which almost entirely hides his face and has protective lenses, a respirator and communicator built in.

A mean man in a meaner time, Dredd is now pushing 70 can this lawman keep going forever?

Judge Dredd has also given birth to two movies. We won't go to into details here as I will do a future post on them. But I have included the following pics to show off the movie versions.
Also as mentioned above there is some talk, as to the colour of the body suit. Some believe it is a dark blue. Whilst other believe it is black. I have read a lot of different arguments on this topic and personally I think it all comes down to an artist/readers own preference. But for me it has to be Black. It's the way Carlos Ezquerra draws the man and paints him, so it must be that way for me. Think differently let me know below. 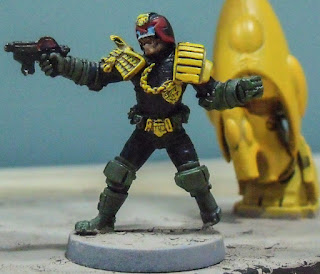 Now to the final part, my painted version. I have gone with the classic black uniform and a more comical yellow than a brass gold effect. Click on the pictures to see a bigger version and drop me a comment to let me know what you think. I have fixed the shoulder pad and yes he is facing off against a Wraithknight in the background- you need big robots in Mega-City One!
​​
And that is it. Thank you for sticking to the end with me and hopefully you like the mini. If you have any questions, comments or just want to hi, then drop me a comment below. Next Sector 102 post will be a comic review.