Welcome to my Eldar Army fluff. So as part of my Eldar project, I love to write fluff and background stories for my forces. So expect plenty of tales like these, some are fully made up whilst some are based of moments from games I've decided to immortalise. To get the ball rolling will start with the Fall of Taspia and my Anti-Hero 'Umr. 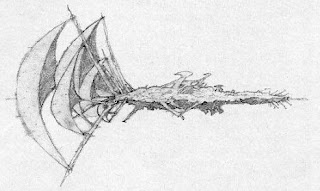 Here follows the Tale of 'Umr At-Tawail and the Fall of Taspia. Taspia was once an ancient Maiden world seeded by the Eldar. A jewel of a long lost empire, now after centuries of Imperial abuse, it has become a polluted husk of it’s former glory. Once beautiful, the green world now hangs in space like a brown rotting apple. Only the Southern Pole has managed to hang onto life. But even those ancient trees are losing the will to fight. The Imperium of man had brought this upon Taspia. The filthy Mon-Keigh had found this beautiful orb and filled it’s air with toxins and polluted it's rivers. They stripped it of all its natural wealth and resources. Trampling and flattening the ancient Eldar structures as they went, caring not for the history of the world.

Only the Southern Forests had held off the Imperial's pillaging. Rumors were spoken by the Taspian garrison's militia in whispered voices, of the Ghosts that haunted those old forests. That the trees themselves were fighting back and that any attempts to enter the region was met only with death. Little did they know it was actually the surviving Eldar Exodites along with a contingent of Rangers from Craftworld Iyanden. Hopelessly trying to hang on to their homelands.

The Rangers had been sent to protect an ancient entrance to the Webway. Farseer Hastur of House Haladesh, had declared the reclaiming of this Maiden world a priority for his kin. That the Mon-keigh would be shown no mercy for the destruction, that they had brought upon this world. 'Umr At-Twail was assigned High Autarch for the Taspia cleansing. The attack would fall on the third cycle of the moon and the polluted capital city of Taspia would burn in it's light. 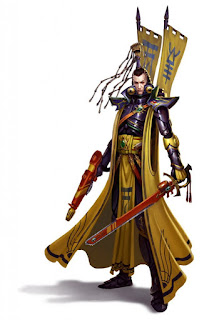 The night before the main attack, the Iyanden Warhost code named "Carcosa" appeared through the Webway portal. Using the old forests for cover the Warhost gathered South of the capital. Autarch Umr’s face was lit by the pale interior lights of the Falcon transport, his fusion gun hung heavy at waist. Even in such a confined space Umr's anger could be witnessed as easily as the light shimmering off his golden yellow armour. His eyes burning with hatred at what he was seeing via the sensors read-outs. Mere minutes after passing through the Webwey portal, the Command Falcon's rear ramp lowered gently to the polluted ground. Slowly decaying tree roots crunched under Umr's foot, as he disembarked with his Fire Dragon bodyguard. His eyes still full of hatred he bent down, placing his forehead upon the poisoned ground and whispered "You shall be avenged. Soon a storm shall descend on the capital of Taspia and rivers shall form from the blood of the Mon-Keigh"

The southern walls of the capital loomed like a cliff. Their colour was a dark rotten brown, due to the industrial smoke pluming from it's vast factories. The city was ninety kilometers across and rose like a weed. Climbing high into Taspia’s now smog filled polluted atmosphere. The fortified section that was destined to be attacked, was covered with gun ports, battle towers, trenches and bunkers. Even though the Imperials had faced no threat they still fortified their positions like paranoid tyrants thought Umr. Turning his eyes to the map of the defenses, he spotted what was a command bunker with the ability of long range warning sensors. The hive's meager garrison militia were easy to spot, hailing orginally from Mordian they wore their parade uniforms of bright red and white, which made them stand out among the browns and grays of the dying planet. "Stupid Mon-keigh, might as well paint targets on themselves" thought Umr, as he turned his attention to watch the live feed from the infiltrated Rangers gun slights. "This won't take long" Umr declared as he turned to meet his advisers and work out the best strategy for the sacking of the Hive.

As he faced his cohort of advisers it was hard not to notice the Ancient Wraithseer Phantom of Truth. Woken to aid in the destruction of Taspia, the Wraith construct stood like a statue, the D-Cannon she carried lay dormant by her side. The Wraithseer had been much loved in the House of Haladesh and her thoughts carried much weight, when she spoke all stopped to listen. After a short while a strategy was chosen. The Rangers were to sneak in and set up for a twilight ambush on the Command post. Then as the moon reached it's zenith, the Scorpion tanks would move forward and begin firing at the southern wall. During this opening phase, the Rangers would be tasked with assassinating the superior officers of this section. Without their head the body would be weak and the defenders would be crushed with ease. Allowing the main force to storm the city. 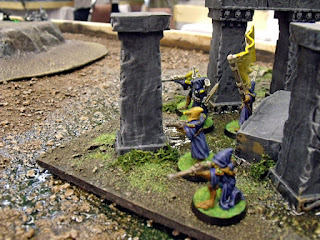 Twilight came and with it the opening shots were fired. Huge chunks of the city walls collapsed and imploded from the fire of the twelve deadly scorpion tanks. Beams of destructive fire, teared holes in a wall that was never meant for combat. Soon whole sections started to crumble inwards from the fierce barrage. From within his Command Falcon Umr watched the carnage unfold. The Mon-Keigh comm-links were full of screams of dying officers as his Rangers located and killed each one, with precise head shots. Following this success soon came the order to Exarch Uoht and his Shadow Weave, Warp Spiders to strike. The blip on screen which represented them, disappeared only for a second. Reappearing in the heart of the Imperial lines. A small grin formed on Umr's face, as he thought of the carnage being brought down upon the Mon-Keigh. Everything was going to plan and soon the city will fall.
**********************************************************************

For one hour and twenty three minutes the battle for the outer wall was waged. Both sides fighting desperately. It had soon become clear that the Imperials were losing fast. Without a senior officer's password, the order for reinforcements hadn’t been accepted by the city's main garrison. Even as the sounds of war where waking a large amount of the populous, the main garrison stood idle. Then at the stroke 2:23am a huge section of the southern wall final gave way and collapsed. The Aspect Warriors and Guardians swarmed into the city, lead by the imposing form of The Phantom of Truth who lead a honour guard of ghost warriors. Now the killing had truly begun. All traces of Imperial life was about to be extinguished.

Soaring over the blasted trench works and into the city. The command Falcon of Umr now headed an Aspect host mounted in Wave Serpents. As they flew deep into the doomed Imperial city, Umr saw soldiers and civilians fleeing before the onslaught at the wall. At least they had enough sense to try and run. Though it was a wasted effort as they were cut down by Pathfinders and Warp Spiders of Uoht’s host. Lost in the moment, Umr nearly missed the looming Imperial Palace as it came into view. It’s walls built from the rare white marble of the planets crust, it shone bright in a World cast in smoke and shadows. Here is where the battle would end thought Umr. Here and now!

The host of Wave Serpents came to a halt on the far side of a square. Just outside the Palace's main gate. Standing defiantly on the step in front of the gate, was the Governor and his household guards. How stupid they look in their brightly coloured uniforms. To Umr and his warriors they looked more like children playing pretend, rather than soldiers of  a long dead corpse God.

But then from out of the ranks strode a portly, ill looking Governor and over a primitive loud speaker he spoke:

"I am Governor Fernando Handoff of Taspia, the Emperor's voice on this world. I demand to know why you have attacked us!"

With a mocking laugh Umr descended from his Falcon along side his Fire Dragon escort. Calmly and with an air of arrogance he crossed the square.

Coming within shuriken range of the Governor, Umr could see the overweight man shift awkwardly at the full slight of him. Umr so enjoyed these moments, never knowing if the enemy would shoot or not.

"You are Mon-Keigh! How dare you even speak, Let alone make demands of me." and with this Umr fired his fusion pistol and set the fat governor a blaze. His household guard stood frozen in place, as the fat body of their leader started to bubble and pop from the heat of the flames.

"Kill them all! Wipe them from this world and cleanse it for the glory of the Eldar"