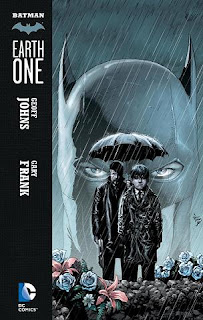 First comic review on the blog!
​​
Welcome to the first comic review on here. My personal preference for comics is normally Judge Dredd and 2000ad, so expect a lot of future reviews on that topic. Today we are instead taking a look at the DC franchise starting with Batman Earth One: Volume One. For those who didn't know (me included until I found this), Earth One is a newish series to the DC line up. The idea behind the series is to modernise the Superhero story lines. With DC retelling the earliest adventures of popular DC characters. The series takes place in a new continuity on an all new Earth separate from the DC Universe, freeing it from continuity restraints and giving more freedom to the writers and artists.

So far in the Earth One series we have the following heroes:


I hope to cover the other titles and heroes in the near future. But this review is all about the Bat! So let us take a look at Batman Earth One Volume One and jump in.

Batman Earth One: Volume One

"In a Gotham City where friend and foe are indistinguishable, Bruce Wayne's path toward becoming the Dark Knight is riddled with more obstacles than ever before. Focused on punishing his parents’ true killers, and the corrupt police that allowed them to go free, Bruce Wayne's thirst for vengeance fuels his mad crusade and no one, not even Alfred, can stop him"

Spoiler alert in effect so please be wary.

The comic is set during the early stages of Batman's career. We meet a Bruce Wayne who is haunted by the unsolved death of his parents and is attempting to solve the case himself. This is a real highlight of this Earth One comic. Unlike our normal super detective, crime fighter: we are instead following an ill prepared, under trained Batman. Who lacks body armour and has experimental equipment that is more likely to fail than succeed.

The story progresses at a steady pace and can be split into two parts. The first part is the flashbacks and through these we learn of Bruce's past in this reality In these moments we learn that his father Thomas Wayne was running for Mayor of Gotham, against a Mr. Cobblepot and his mother Martha was actually an Arkham (a family renowned for being Gotham's creators and also a family of madman!). We also meet Alfred who is an ex-military friend of Thomas Wayne, called in to act as a bodyguard of sorts for Thomas, who has received death threats leading up to the mayoral vote. This ultimately lead us to the night of the Wayne's couple murder, which in this universe is actually all Bruce's fault! As a young Bruce mouths off to a criminal/street scum about how his parents rule Gotham and are super rich. This is a great twist as it shows us a Bruce, that is a spoiled child and the cause of his own pain and guilt. Unfortunately for this Bruce, he is too young and naive to understand cause and effect and how his actions lead to the death of his parents; instead he believes it was all some part of a conspiracy to remove the Wayne's from the Mayoral race. Alone and now an orphan, young Wayne is left with a man called Alfred who he has never met. Struggling to explain his role in all of this, Alfred calls himself Bruce's butler and begins to assume this role.

As Bruce ages in the flashbacks so does his need for vengeance and following an accident involving Bats (surprise!), Bruce is soon on the path to becoming Batman and is determined to discover his parents killer. During this time Alfred has revealed his true identity to Bruce and starts training him in military fighting styles. The two butt heads over how to deal with criminals with Bruce believing in not using guns and causing death, whilst Alfred feels the best cure for Gotham is to cut the poison out permanently.

This then leads us nicely to part two, Modern/now time Batman. With Alfred's training and guidance an early twenties/mid-twenties Bruce has now adopted the Batman persona. Batman is now hunting down the criminals of the city, to find answers over his parents death. Bruce isn't the only one changed by the death of parents, Gotham is now a changed place. Under Cobblepots leadership the city has fallen to the criminal organizations and the government run institutions like police, judges etc. are just as bad as the mob. It's now that we also get to meet the real characters of Batman Earth One so let us look at each of the main characters:

Batman of this timeline didn't travel the globe training with combat masters, league of shadows or even learning basic cop skills. His only tutor for fighting skills was Alfred Pennyworth which leaves us with a barely competent Batman. What we come to see from this tale is a Batman who relies way too much on luck and others to save his life and avenge the death of his parents.

In Earth One, Alfred isn't a butler, but is an ex-Royal Marine and an old friend of Thomas Wayne. Alfred is called in by Thomas to act as security, but on his first night on the job the Waynes are killed and is sole protector of Bruce. It's an interesting reimagination of the character, explaining his abilities and medical knowledge quite nicely.

Detective Gordon is a broken and defeated cop. When we first meet him he is a coward turning a blind eye to crime and taking bribes from the criminal organisations of Gotham. During this comic we get to watch Gordon grow as a character as he returns back to the heroic cop role we need and expect him to be. Best part about Gordon in this version is the fact he is willing to get his hands dirty and now and again sink to the criminals level to get the job done. Reminding me more of Jim Gordon of the Gotham TV show.

Bullock is a slim, fit and handsome (not what I was expecting) cop. Having transferred to Gotham from the west coast, where he was also a tv star. His early motives in the comic is to solve the Waynes Murder in hopes of regaining his tv career. But Gotham and has other plans for poor Bullock. By the end of the comic Bullock is a broken man, his hopes and positive attitude all but destroyed by Gotham's darkness. Leading us to character heading towards our standard Bullock persona. 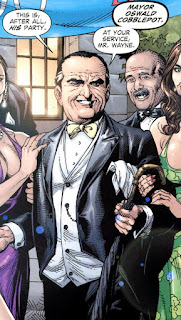 Don't expect a classic Penguin villain here. Instead we have a corrupt Mayor who has positioned his allies to posts of power and cut deals with the mobs to gain a controlling influence over a now rotten Gotham. Not an overly exciting character, but good enough to be a focal point of the comic.

The rest of the story is almost a coming of age tale for Batman, Alfred, Gordon and Bullock. As their tales all merge to become one story. The main villains Cobblepot and Birthday Boy, are ultimately a let down as are overcome a bit too easy, but do lead to some good character development (especially for Bullock). The final page leads us to the plot of Volume two, which seems to be Riddler focused.

Overall I enjoyed this retelling. Is it a groundbreaking retelling? No. But it is a well constructed darker, more believable version of Batman. He isn't good at what he does, he isn't well trained, he is just a man wanting to be a vigilante because he is angry. Are the villains over the top comical madmen? No, instead they are a byproduct of times and are greedy, power hungry individuals using positions of power to get rich and in a real world where Trump could be a President is this hard to believe... Highlight of this comic for me though is the artwork, it really is wonderful and fully immersive. Gotham has a dirty, brooding aspect to it, more like a 90's New York before the clean up. Batman's costume looks realistic and homemade, constantly getting ripped and damaged. The gangsters look like real people and not punks/comical re-imaginations. It really gives it a now a days look, which I feel is important for a Batman setting.

This is a great beginning to a new series and I have already got hold of volume two so expect more on this franchise.