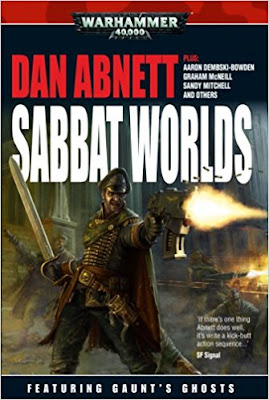 "Across the Sabbat Worlds a bitter conflict is fought that can only end in victory or annihilation. Yet even amidst this the Astra Militarum and their allies stand stoic against their foes."

So this review is a bit different from the norm as it is Anthology of tales set within the time frame of Gaunt's Ghost and Sabbat Crusade. As we go through the tales I will write more about the stories I enjoyed and less about the ones I didn't. Simple.

The opening story is a follow on from Dan Abnett's original novel "Double Eagle". Double Eagle followed the exploits of the Phantine XX Thunderbolt pilots and this story continues along this theme. We are introduced to the infamous thunderbolt fighter group of the Imperial Navy code named "Apostles". The "Apostles" are the aces of the aces. Basically think of a 40k version of Top Gun and you are not far off. Simply put they are the best of the best. Even though they are elite they come across proud and aloof from their peers. But as the story progresses we learn why these guys chose to act this way. As they strongly believe commandery to be a distraction and in these war torn skies one distraction will lead to death.

The main character for this story is Flight Lieutenant Larice Asche. She was chosen by the "Apostles" flight leader to join the elite wing, but in doing so she had to turn her back on and leave the Phantine XX (an already highly decorated unit of Imperial pilots). Throughout the story we sit in the cockpit with her and experience the war through her eyes in the skies. Thanks to this unique viewpoint we are treated to each g-force crushing dive and feel the adrenaline rush as she blows up an enemy plane.
​​
McNeill kicks the action off right from the get-go with this fast paced air combat. Highlight for me is that McNeill puts you right in the cockpit. He describes each adrenaline pumping high-g turns, stunning dives, and stomach-churning rolls with a skill only a master like him can achieve. Yet even with all of this air combat excitement, McNeill manages to produce excellent characters who you instantly want to succeed. Even though it was a short story McNeill achieved to round out the main characters really well. He shows us why the "Apostles" are a select few and makes you want to be one of the elite. And I hope in future he might return to add to this story arc.

The Headstone and the Hammerstone Kings by Matthew Farrer

First of this story confused the hell out of me. The Headstone and the Hammerstone Kings centers around the cogheads of the Adeptus Mechanicus and the way it stockpiles destroyed relics of war machines. In this case those of the arch-enemy. Sounds easy enough I hear you say, but then you start to read more and get completely lost by his use of point-of-view narration, as he jumps from character to character. One minute you are a rebel, then an Imperial, then a rebel again. It quickly lost me as I struggled to keep up with who I was seeing the world through. It just did not sit well with me. I even found myself backtracking to reread sections to try and set my head straight (which didn't help). I felt if the story had been given the space to fully explain itself, then it could have been a great tale. But due to a lack of any real info I was left confused and dishearten by a tale that had great promise. 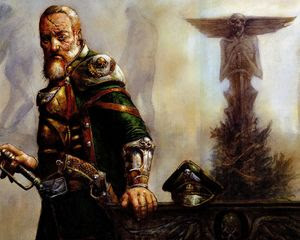 A bit of background context to help; Regicide is a game (similar to chess) that Dan Abnett invented for his characters to play in his book.

The intro to this story, had me in fits of joy. It's what I would call a pure fluff/fanboy story. Centering around the fallen (in the current Gaunt's Ghost arc) Warmaster Slaydo and his personal bodyguard regiment the Argentum (which I believe means silver or is a chemical name for silver?), "also known as the Silver Kindred, the Warmaster's Own, and on the Munitorum rosters - the Khulan 2nd Huscarls."
​​
So as stated this is all about the now fallen Warmaster Slaydo and his final moments on Balhaut before his famous death. The main character of the tale is Senior Sergeant Commodus Ryland. And he recounts Slaydo's final moments on the eighteenth hour of the tenth day, whilst being tortured. His story culminates in the EPIC scene where Warmaster Slaydo duels with Archon Nadzybar (the first Archon of Gaur's lieutenants), to the death on the rooftop of  a fallen palace. This story is absolutely amazing. Dembski-Bowden makes the characters come to life. And really brings forward Slaydo's mannerisms and jovial nature, as much as his tactical brilliance and martial skill. You can see why Slaydo, is clearly a person loved and idolize by his men. The pacing of the story is quick and actioned packed, I did not want to stop reading this at all. I seriously hope Dembski is allowed to write more for the Sabbat crusade lore.

The Iron Star by Dan Abnett

This story is a continuance of the Gaunt's Ghosts series by Abnett (I love this series everyone needs to read it!), and is set between the novels 'Only in Death' and 'Blood Pack'. The story takes us into Gaunt's own mind during the aftermath/fallout of the Hinzerhaus operation. Abnett reveals this detail slowly throughout the story. And that's all I can say without giving way too many spoilers. To find out more go buy the book! However, we do see the return of a few fan favourite characters in this story, including my personal favourite Try Again Bragg. What can I say it's Dan Abnett and is a classic piece as I've come to expect from him. 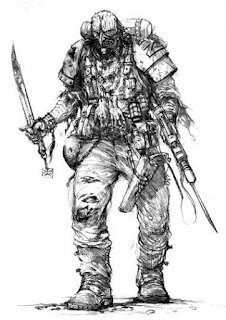 The Cell by Nik Vincent

Vincent's tale takes us too the chaos held world of Reredos. Where all the crops are being replaced by a chaos warp infused crop, that is slowly destroying the planet simply by growing (GM crops basically). The main story arc involves an Ayatani priest by the name of Perdu, who holds a religious mass for six workers who come to pray with him once a week. Through this group we see how a rebel cell works and communicate to one another and the story takes us into the mindset of a resistance fighter, show us how they don't trust anyone, especially their comrades. You spend the whole tale wondering if or when someone may betray them. I found the characters to be well developed and the story is quick and actioned filled. It was a great short read.

Known mostly for his work on Salamander stories I was interested to see how Kyme would handle the Bluebloods aka The Royal Volpone 50th. Yes the same "Bluebloods" who are always causing trouble for Gaunt and the Tanith First. I believe the story is set after siege of Vervunhive. Just after General Noches Sturm deserts his post and is court-martial-ed and nearly shot by Gaunt (that is a story far from done with).

Kyme writes a story about the Volpone 50th and what happens when a formation gets recycled into a reserve position. Stationed at Sagorrah Depot (an important fuelling station for the crusade), the Bluebloods find the condition of discipline and order to be out off control. The Blueblood's Major Regara, notes how the local Commissar for this garrison is lacking control over the stationed men and decides to take the matters of discipline in his own hands. His first port of call is a mission into the slums surrounding the depot. Major Regara and his three squads of men suffer from an ambush of Archenemy troopers. When all seems lost allies are found in a regiment called the "Longstriders".  A regiment who remind me and the main characters a little too much of the Tanith 1st. Due to this past memory, Regara is rude towards the Longstriders and refuses to thank them for saving the Bluebloods.

As the story progresses along we slowly see the camp falling apart. The garrison is going crazy. As each hour passes it just gets worst, fights are breaking out, troopers are killing each other and once allies are turning on one another. Major Regara notices that the only place where the camp is peaceful, is where the Longstriders live. After a friendly chat (it so isn't), the Longstriders tell Regara they've discovered the reason for the infighting. Major Regara and the Volpone's join up with the longstriders to go on a secret mission into the local caves. Where they soon realize that things are far worse than they ever feared.

This story was one of my favourites. It was nice to see some old enemies having an adventure, and for once wanting to see them succeed in what they are doing. All in all another strong story
​​ 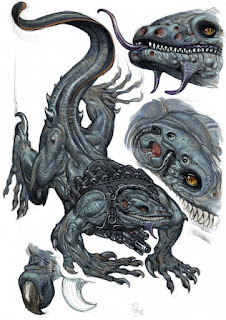 A Good Man by Sandy Mitchell

This little story is set once again after the Siege of Vervunhive. It's follows an Imperial scribe that arrives shortly after the fighting has ended (a year or two I believe), to aid with the reconstruction efforts. Whilst looking for a missing friend he is slowly drawn into a web of lies. The story is "narrated" by an Adeptus Arbites called Wil Feris, as he searches for another scribe that has "falsified documents". A crime equal to high treason in the scribe world law book. It's a great story and has elements of humour that Sandy expertly adds to the story and makes it all the more enjoyable.

As stated in his introduction for this story, there isn't much I can write without ruining it. So I plan on keeping spoilers to a minimum. It's a newly written Gaunt story just for this anthology, but it doesn't take place very recently, like The Iron Star does. In fact it takes place during the 'Ghostmaker' book. Of Their Lives in the Ruins of Their City is set between the actions of Voltis City, on Voltemond, and the action on Caligula. The clear theme of this story is the pressure upon Gaunt's shoulders at this time. It's a tough job, especially for a man who is hatred by the men who follow him. And that's all I can tell you! It's a great read, a must for Gaunt fans and is well worth the read.

Overall, this anthology was a pleasure to read and I hope you've enjoyed the mini reviews? Should you buy this book? YES!!

If you've made it this far then thanks for reading and please leave a comment. Cheers
Posted by Adventures with Peps at July 31, 2017