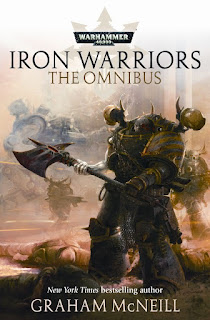 "Experience the rise of Honsou from despised half-breed to one of the most dangerous Warsmiths within the Iron Warriors Legion – and one of Black Library’s most popular and compelling characters."

The Iron Warriors Omnibus draws from characters and events made infamous in the Ultramarine series also written by Graham McNeill. This omnibus contains the following stories: Storm of Iron, The Enemy of My Enemy, The Heraclitus Effect, The Skull Harvest, Iron Warrior, The Iron Without and The Beast of Calth.

Now as most of you are aware I've enjoyed 40k since the 90's and remember the initial release of Storm of Iron fondly. So when I managed to get my hands on the omnibus I was excited. Add to this that I had a two week lazy holiday in Greece and I was set up for an epic reading session. Once I started reading, I found it almost impossible to put down. McNeill's writing has always managed to capture my  imagination and as far as Warhammer 40,000 stories are concerned he comes second only to legendary Dan Abnett. 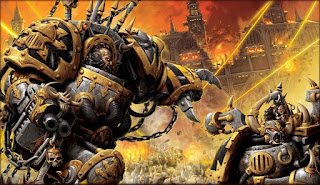 The first story is Storm of Iron, which contains one of the most detailed and imagined siege battles I have so far read. Each section of the book is represented by the progression of the siege parallels. This creeping advance of the siege and the story being told from both sides. Combine to absolutely absorb you into the battle happening around. Now I hate spoilers like everyone else, but this is a review, so if you don't wish to know the plot then stop reading now and just get the book already!
The characters of the series are well thought out on both sides. But it's best to remember that it's a story about villains, so the loyalist characters rarely survive. We get introduced to the main villain of the piece Honsou, of the Iron Warriors. Who later becomes a major player in the Ultramarine series. The whole point of this book however, is to show Honsou's progression from a Champion to a Warsmith (titles given to warriors of Chaos). All the while set in this super descriptive siege battle. The siege itself has titans clashing, daemonic engines rampaging and fortresses falling. This is a fast paced tale, that has you rooting for characters on both sides. Rarely for me have I managed to complete a book so quickly, so praise must be given to the author for his captivating writing.
​​ 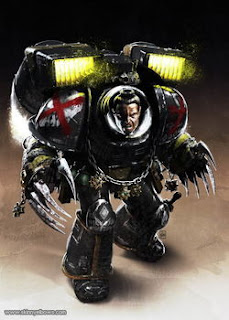 Following on from this epic, we are treated to a trio of short stories. The first tale is called The Enemy of My Enemy. This short story actually follows the fate of some of the loyalist characters. Who managed to survive the siege. Now captives of the Iron Warriors they are like cattle, working in a hellforge within the Eye of Terror (A ruptured part of space). It also introduces us to some renegade marines working for the Red Corsair. The main character of this group is Vaanes, a former Raven Guard Space Marine, who we get to know better in later stories. This story though short is very fast paced and easy to read in one sitting.  It's one of the stories only available in this book. In the time line compared to the Ultramarine saga, it is set just before Dead Sky, Black Sun. At this point I suggest reading that book, as the next story is set after it.

The Heraclitus Effect, as mentioned follows on from the Ultramarine book. We find that the fall out of that adventure, has left Honsou wanting revenge on Ventris (Ultramarine hero) and his precious Ultramarines. This tale continues the fast pace of the book so far. Humiliated by the Ultramarines and wanting revenge Honus gathers around him his remaining allies and does what all great villains do.....he plans to destroy a world! Once again we get to see Honsou at his best/worst and is one of personal favourite stories from the book. 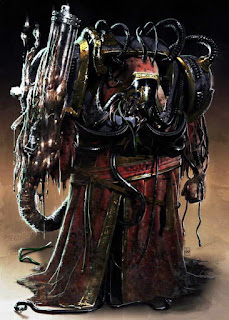 Tale three: Skull Harvest. Here we find Honsou riding proud after destroying an Imperial World. On top of this Honsou is now attempting to raise an army to invade the Ultramar system (this invasion is written from the Ultramarine side in The Chapters Due book). The story mainly follows Honsou, Vaanes, Grendel and the Newborn as they go through the Skull Harvest trials to gain an army. It's during this period that the Newborn, comes to realise what it means to be a Chaos Space Marine. I enjoyed this story due to it including Huron Blackheart and his Red Corsairs.

​​Following on from Skull Harvest, is Iron Warrior, once only available as a limited edition novella. This part of the tale is set during the invasion of the Ultramar system. A deep space travelling star fortress is the Iron Warriors target, contained within it's core lurks a deamon. Trapped and guarded by a company of Ultramarines, the Deamon's only chance of freedom is to be rescued by Honsou. This is an action paced boarding action come siege. Best part for me is the Ultramarines being lead by a Venerable Dreadnought, something hinted at but never seen gamewise. This is a brutal, fast paced, enjoyable and action packed tale. Making you fear every corner and corridor. 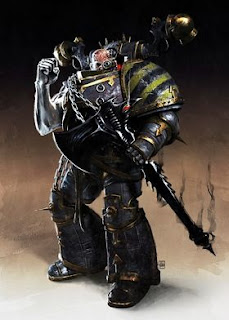 The final two tales can be merged into one for ease of writing. The Iron Without and The Beast of Calth, both take place within the Ultramar system on Calth. The first tale is set during the initial invasion and the second is set just after the failed attempt. It's hard to review these without giving away too much of the story arc. But it shows just how calculating and malicious a Chaos Space Marine can be. And rounds off the omnibus perfectly.

I struggled to put this title down and when I finally did I found myself dreaming up 40k army ideas. I now want to read more Graham McNeill books (eyeing up the Ultramarine series now) and would happily pick this up and read it again. For me this title was a success and I would recommend it to anyone.
Posted by Adventures with Peps at July 11, 2017