Book Review 01 // Path of the Warrior by Gav Thorpe 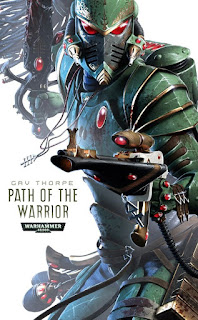 Well to book one on the book review series! As you will come to realise I'm a fan of Elves, Eldar, Aelfs, Fair Folk etc... So where better to begin than a 40k novel about Eldar.

Book 1 of the Path of the Eldar

When the eldar artist Korlandril feels the call to war, he walks the Path of the Warrior and joins the Striking Scorpions. As his craftworld is drawn into war with the Imperium, Korlandril finds that once he has begun walking that path, it may not be easy to leave it…

Today I finished reading ‘Path of the Warrior’ by Gav Thorpe. I've been a long time fan of the author, growing up reading his articles in White Dwarf and joining him on his journey into full length tales. He is one of a small number of authors who has managed to portray the Elfish race in a way I really enjoy. Path of the Warrior is the first book in a series of three. Set in the grim dark future of Warhammer 40,000. I will assume that if you found this blog then you have a working knowledge of this setting, if not take a second or two to google the terms getting used.

The book begins by following a squad of Striking Scorpions as they wage war against the forces of the Imperium. This opening short story is a brutal introduction to the way the Eldar wage war. As this tale ends we join a squad of Striking Scorpions, having lost a member of their team during the conflict the Exarch decrees "another will hear the call to war". From this war torn scene we are taken far away to the peaceful Alaitoc Craftworld (a Spacecraft the size of a World), to meet Korlandril the main character of the book.

Korlandril is portrayed as an average member of his race, who during his long life has trodden many paths and followed many disciplines. At this moment in time Korlandril is walking the path of a sculptor. Having gained quite a bit of renown and respect amongst peers, Korlandril sets his sights on gaining the hand of his true love. However, when a long time friend returns from his wandering of the stars. Korlandril's life is set on a new more dangerous path, one filled with rage and anger. Feeling himself unable to control these emotions, Korlandril seeks help from the only place he knows; the Path of the Warrior. Following his emotions and instinct Korlandril ends up joining the 'Deadly Shadow shrine' of the Striking Scorpions. A warrior caste who use stealth to overwhelm their opponents. Within this new safe space (as safe as a warrior lodge can be) Korlandril starts to work on  controlling this new found rage. The focus of this control can only be found in the destruction of the enemies of the Eldar and letting go of his anger.
​​

Now I am slightly bias as I am a huge fan of The Eldar and Elves in general so it's no surprise that I would enjoy this book. It holds up great against any other 40k themed book out there. With a story that gives us this fully formed character of Korlandril, along with great insight into the inner workings of an alien’s mind.

The novel begins in a way I did not expect from a 40k novel, it began with peace! Instead of being thrown head first into the war torn bloody future, we are instead given time to enjoy Korlandril as a sculptor, a friend and as an Eldar in love. This for me was a great read in itself. I got to experience what really happens on a Craftworld, and what locations exist there. The fluff nerd in me loves these details and Thorpe pulled it all together brilliantly. Giving a great insight into what makes the Eldar tick. 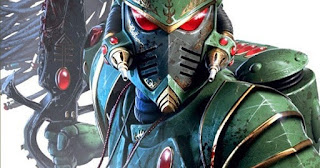 Then from this state of peace we slowly watch Korlandril’s world collapse as beauty becomes rage. You are left powerless as Korlandril is consumed by his rage and all his beauty and peacefulness is lost to us. The book moves forwards into a more aggressive world, dealing with Korlandril's time in the Striking Scorpion Aspect. Getting to learn how one becomes an Aspect Warrior, really ignited my imagination and was well depicted without taking up to much of the readers time. Then of course you can't be a warrior without going to war! The battle scenes are well thought out. Focusing purely on this one squad's experience rather than the whole army and the bigger picture. I personally would have liked either more battles or longer battles scenes, but maybe it's just me wanting to see more Mon-keigh (Eldar term for humans) dead.